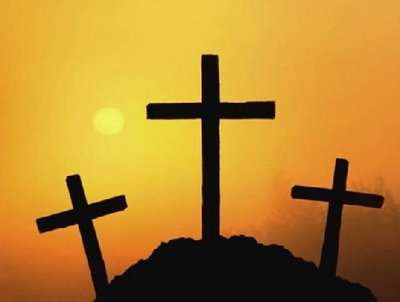 Often romanticized, bejeweled, and loved as beautiful – but symbol of the cross was nothing of the sort when Jesus met it two thousand years ago.  It was the most hideous, damnable, obscene instrument of death one could imagine.  The cross was man’s best attempt at a torturous hell on earth.  No person in their right mind would ever connect a cross with anything of church or piety.  Just the mention of the cross sent chills down the spine of the worst of evil-doers.  What was done on the cross would rival the acts of Hitler or Hussein – yet entirely legal, yeah even encouraged by society.  But on that spring day in Jerusalem, there wasn’t just one cross, there were three…

The First Cross – Dying in Sin
The Scriptures (Lk. 23:39) tell us that Jesus was crucified between two thieves.  This first sinner is Mr. Skeptic.  He spoke to Christ in loud, harsh tones: “IF you are the Messiah, then show us. Save yourself and us.”  This isn’t an unreasonable request, is it?  After all, you wouldn’t trust a lifeguard who couldn’t swim, so why would you trust a Savior who couldn’t save himself?  Interesting that he prays a prayer for salvation – but never mentions his sin or his need of forgiveness.  All he’s interested in is a quick fix – an escape from the consequences – without a true realization of the cost of the salvation he requested.  His ‘prayer’ went unanswered;  Mr. Skeptic died in sin.  If all we ever want is a band-aid salvation with no real repentance for sin – we will die in sin, too.

The Second Cross – Dying to Sin
Although the second thief started by questioning the Messiah (Matt. 27:44), something happened in Mr. Faith’s heart… he did a 180º turn-around (repentance) and realized that he deserved the punishment – but that Jesus did not.  He even rebuked the skeptic’s mockery.  But the most important thing Mr. Faith could do was to request mercy.  He said, “Your Majesty, think of me from your throne.”  What an insightful statement he made.  He believe that Jesus was everything he claimed to be.  He believe that the sign above his head was true: “This is the King of the Jews.”  And we know that what Jesus promised (and God never lies), came true that day.  In fact, one moment Mr. Faith was gasping for air, bleeding to death next to Jesus on the cross, and the next moment, he is standing next to Him breathing in the fragrant air of eternal paradise.  If we will repent of who we are and confess who Jesus is – then we will stand with Jesus in paradise someday, too.

The Third Cross – Dying for Sin
If there was ever a person who did not deserve the torture and shame of the cross, it was Christ.  He had never committed a sin – much less a crime.  Yet, there He was – hanging between two sinners.  What an example!  In the midst of pain, during the most crucial moment in all of human history, Jesus is reaching out to the sinner – the one accepting Him by faith.  But this was not the end of the God-man – just as death is not the end for any who believe in Christ.

Years ago, Queen Elizabeth I gave the Earl of Essex a very special ring.  This ring could be presented to merit an immediate audience with the Queen, should he find himself in any trouble.  Just as the Queen feared, the Earl was indeed accused and executed, yet she never received the ring.  Months later, the Countess of Nottingham confessed to not delivering the ring for the Earl.  An innocent man had died unnecessarily.  The Queen’s response was recorded in history, “God may forgive you, but I never shall.”  We can be thankful that there is nothing God cannot forgive.  He wants to forgive you.  Do not meet God never having accepted his offer of salvation!