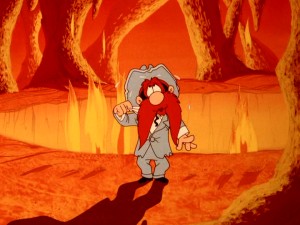 Did you know that more people believe in heaven than hell? Even if they do not believe in the actual existence of the place, almost everyone has their own concept. Some people believe it’s where all the “cool people” go, and that only fuddy-duddies go to heaven. They laugh and joke about the wild parties that take place, and that the “real” party won’t start until once they arrive. Others believe we are living in hell now and that our only escape is by death into heaven. Still others believe that hell is just an exaggerated expression that people use to curse with but that it is not an actual place.

My earliest concept of hell probably came from the things I saw and read. Similar to the perception many people have, comic book and cartoon artists have also described it as dark, cave-like and fiery place where bad people go or spirits reside. Could it be that similar representations of hell have desensitized the general public so much that it no longer has the same impact on the modern world? The Bible describes hell as being much more terrible. You will find it described as a place of “disgrace and everlasting contempt” (Daniel 12:2), where there will be only “torment and agony” (Luke 16:23-24), an “eternal fire” (Matthew 25:41), that “is not quenched” (Mark 9:44), an “eternal destruction” (1 Thessalonians 1:9), and where the unrighteous will be “tormented day and night, forever and ever” (Revelation 20:10). Not so good, right?
Several Christians today have grown so comfortable with hell being an expression that they no longer take it as seriously as the Bible says they should. Many prefer not to talk about hell because of the “negative connotations” it often carries. In an interview with Larry King, the author, motivational speaker and pastor of Lakewood Church in Houston, Joel Osteen, said, “I know there is condemnation, but I don’t feel that’s my place [to talk about it].”
But if Christians don’t talk about hell, what makes the good news of the gospel so good? In fact, during Jesus’ ministry on earth, he spoke about hell as much, if not more than, heaven! (Luke 16:19-31, Matthew 23:33; 25:31-55). The Bible clearly teaches that the punishment of sin and lawlessness is an infinite and eternal death that each person has earned (Romans 3:23; 6:23). It is only after understanding this that the good news is actually “good.”
The good news of the gospel is this: Jesus Christ came to this earth and lived a perfect and sinless life. He shed his blood and died on the cross to to pay for sin by taking God’s wrath upon himself. He was buried in a tomb and on the third day rose again to defeat sin and death once and for all. To be reconciled to God one must trust in the Savior, Jesus Christ, and repent (turn away) from sin. Jesus said, “Repent and believe the gospel” (Mark 1:15).
Christian, why don’t you share this with others? The bad news is only offensive if you don’t follow it up with the good news. Share Christ with love. Because without the good news, the truth of the bad news would be the end for all.