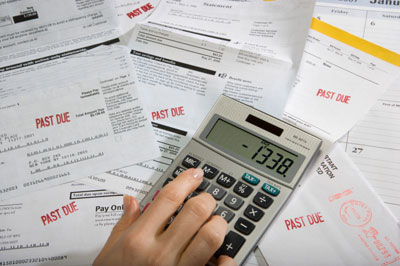 We pick up the story in Ps. 42-43… David is discouraged: struggling emotionally, sinking in the quicksand of discontentment.  He is complaining about what he doesn’t have and feels like he needs.  He feels distant from God and lacks true perspective of life.  Then he begins to preach HOPE to himself… fighting the battle of hopelessness from the inside out, rather than letting the outside overcome him.  Three times, he repeats this tiny sermon: Ps. 42:5, 42:11, 43:5.  “Hope in God!”

“I’ve been to the bottom… and it’s solid rock!”

There is a simple outline for this series of articles on hope – it’s found in Luke 4:18.  It is Jesus’ model for ministry; it is the Spirit’s agenda; it is the purpose of the gospel… Hope for the Broke, the Brokenhearted, the Bound, the Blind, and the Bruised!

There’s a big difference between being broke and being poor. Being poor isn’t about an amount of money – it’s about your attitude toward money.  You’re broke when you don’t have anything, but you’re poor when your attitude is affected.  Many have grown up poor but never knew it, because their parents didn’t have an attitude of poverty.  Being broke doesn’t mean you have to be poor.  God wants to rescue us from poverty (the attitude) and would have us live in His riches (grace) by the power of the gospel.  Look at what Jesus says is the answer to poverty in Luke 4:18.  What do the poor need most? The gospel!

God’s Promises to the Broke

1. God’s got BIG PLANS for me (Jeremiah 29:11).  The sum of your checking, savings, and 401(k) do not limit God’s plans for your future.  God is not hindered by your lack, nor is He enabled by your abundance… quite the opposite!

2. I have some things that no one can take away (John 14:27).  I have a relationship with God, His power, and a home in Heaven.  I have a good name, a decent reputation.  I have some good friends, an awesome family, and their loyalty.  I have a clear conscience and I’m looking forward to a good night’s rest.  Money can’t buy these things – only the blood of Jesus.  Mastercard has done a nice job in make sure to confuse this issue with their ‘Priceless’ campaign.  They stress that money can’t buy happiness, but it sure gets you closer than anything else does. Pretty crafty, huh?

3. God is the Provider of ALL my needs (Philippians 4:19).  As I contrast this verse with verses 11-12, I realize that God doesn’t give me everything I want – not even everything I think I need.  But He knows what’s best for me and I trust Him.  I don’t find hope that will fix my situation, but in the fact that He IS and that He is good.

4. God blesses my GENEROSITY (2 Corinthians 9:6-8).  When I’m broke, I’m tempted to turn inward and become very miserly (poor-mentality).  Don’t let your lack turn you into a taker!  Never resist a generous urge.  Be a giver – and God promises to give back to you.  Sow the seed, I dare you.

5. I am not alone: God is my FRIEND and companion (Hebrews 13:5). His presence makes the difference.  It’s what brings hope in the most hopeless of circumstances.

2 thoughts on “Hope for the Broke”