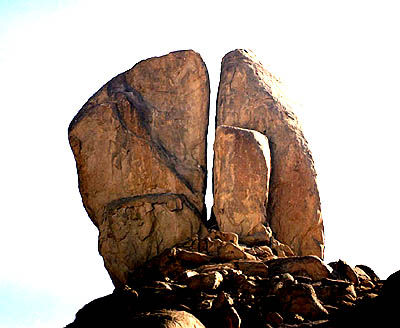 The Bible is a book about God – who God is and what He wants.  Exodus follows the same pattern – it is a book about God.  The message is simple: God is good. He is good and what He does is good. Every chapter speaks of the very hand of God throughout the deliverance and journeys of Israel.  Exodus 17:1-16 records two such events: water from a rock and the first battle with Amalek.  But Israel turned a question of God’s presence into an accusation of God’s neglect.

They were following God’s leadership when they were led to the foot at Mount Sinai (Jabal El Lawz).  But their tongues were parched and their canteens were empty.  They had expected that if God was with them, they wouldn’t have any needs go unmet and when their needs went unmet, they began their chiding (v2).  Chiding is an old English word that means ‘to set forth a case, to argue like an attorney, to require a burden of proof.’  Wow – did you catch that?  They began to second guess God, saying ‘God, I don’t believe I can trust You.  Prove it by giving us water!’  What arrogance.  What distrust.  In this, they tested the Lord’s patience.  I don’t think it would have been wrong for them to ask, “Is the Lord among us?” but they added the ‘or not’ changing it from a question into an accusation (v7).

It’s God’s prerogative to prove us, but not for us to test Him.

Moses went to the rock with the elders and hit it with his rod.  God stood on the rock and caused it to break and pour out millions of gallons of clean water, enough for 2 million people and their cattle.  The rock still stands today as a testimony of God’s goodness.

On the heels of that test was another – Israel’s first battle (v8-16).  The Amalekites (descendants of Esau) were God-haters and forever enemies of God’s people.  They attacked Israel like a wild animal targets the weakest of the herd (Deut. 25:17-18).  Moses, Aaron, and Hur climbed the hill while Joshua led the warriors into battle.  The battle belonged to Israel when Moses’ rod was held high, but Amalek gained ground when Moses got tired and his arms sank.  So Aaron and Hur held up his arms until the sun set and Amalek finally retreated.  That night, not one man could be credited with the win.  Joshua, Moses, Aaron, Hur… not one could take credit nor give total credit to another (except the Lord).  God again proved Himself good, strong, and in control.

God wins.  God always wins.  And when we fight on God’s side, we always win too (Isaiah 54:17).  We can trust Him with our needs and our battles.  He is always good.  He takes us through situations like these so that we may learn to depend on Him even more.  God is good at what He does, so let’s trust Him to keep it up!