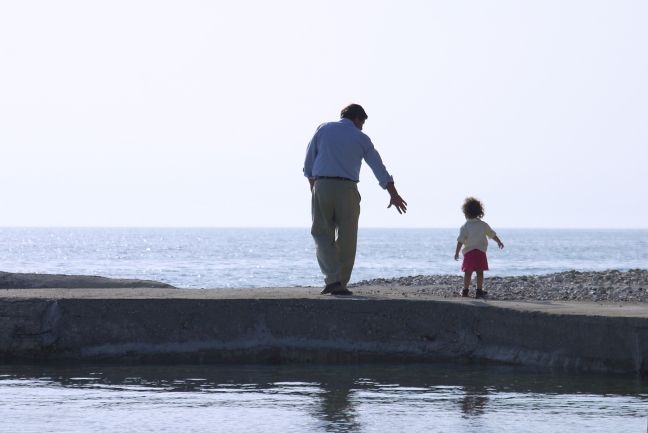 Before the sun sets again, I must tell you what you mean to me. I love you. I’m so proud of you and thankful for the opportunity to be your father. You are so beautiful in my eyes. I couldn’t be happier with you. I have loved you since the moment that you were conceived. You are mine and I am yours. You bear my likeness, and I’m so glad – I hope you are, too. You are a masterpiece of creation, hand-woven with strength for a purpose. You have been gifted with so much potential and opportunity. I treasure you. I love you. (Genesis 1:26; Exodus 19:5; Psalm 139; Ephesians 2:10; 2 Peter 1:3)

I am thankful for your trust; it’s natural for a child to believe in their father. But I’m very sorry that you’ve been dealing with such difficulty lately. Don’t ever forget that you have an Enemy that wants to separate us. Pain, failure, bad experiences… these all might lead you closer to home or further away. That choice will be yours. I know you struggle within yourself, with your emotions and thoughts. I understand. Remember to always trust the One able to do more than you could ever pray or dream (Romans 7:18-19; Ephesians 3:20; 2 Peter 5:8). I’d like to challenge you to the following three goals:

Did you know that kids ask an average of 125 questions per day? Did you know that adults only ask about six? What happened to the other 119? Why do adults ask so few probing or provoking questions? [You get the picture.] Asking questions does not mean you are stupid, it means you want to learn. Never be satisfied with what you know. Seek to grow. Ask God. Search the Scriptures. Never assume. Knock on every door until you find the conclusion. Don’t weary of the chase for truth. And never forget to ask yourself! Be curious until the day you meet the One who knows all the answers and still asks the best questions. (Matthew 7:7; Luke 2:46; John 5:39)

Some people are afraid to ask because they think it reveals a weakness. Know this: it is wrong to stop asking questions. We will never be finished or totally complete until the end. It took our Creator six days to form and fill the world. Allow Him to form and fill you. The moment you begin to assume the answer instead of asking the questions is the moment you will begin to die. Many a grown-up has unknowingly capped their potential by their assumptions. That’s why Abraham had to be taken outdoors to see what God’s plan was. Abraham had given up on the impossible dream that God had given him, until he saw the stars. And that’s why Moses needed a flaming plant to snap him out of a 40-year rut of running from God’s impossible plans for deliverance.

I truly believe our world has mislabeled failure and success. For example, don’t most people stop trying when they succeed at what they attempt. Most will stop trying (failure) when they reach their goal (succeed). Can you see how backwards this is? Humor me and switch the labels for a minute. What if what we usually considered failures, we would see as successes and vice versa. Now, when you try something – anything – the only way you can fail is to quit. The way you succeed is to keep trying. Victory is to believe you can and defeat is to assume you can’t. So many never try because they are afraid of failure, but in reality they have already failed. Have some guts about you. See failure as a step toward success, every closer to the goal.

Joshua was one of the most courageous people in history. He didn’t win every battle, but he didn’t worry about that. He just kept fighting all the way into the promised land. Jacob wrestled with the Angel all night and would not let go because he needed the blessing. The Bible says he kept going forward from good to great! (Note: Never think that hard work without God is enough. It’s never enough to have faith in yourself. With God, all things are possible! Without Him, we can do nothing.) (Genesis 26:13; Mark 10:27; John 15:5; Philippians 1:6, 4:13)

You are young and bound to make your share of mistakes. You will likely fall many times. Always get back up. Even if you fall seven times, over the same stupid thing, just get back up, knock the dust off, and keep going. The only one that can keep you from finishing is you. No other person has that kind of power over you. Never blame others. Never stop going forward. Never look back for too long. Don’t let the culture shape you into their mold. Don’t let the Enemy deceive you into a counterfeit truth (a lie). Don’t be moved from your purpose as God’s child. This world is only temporary, set your sights higher. Avoid the temptation to be less than what you know (and I know) you can be. Stop at nothing less than the glory of God in your life. Do not quit. (Proverbs 24:16; Acts 20:24; Romans 12:1-2; Colossians 3:1-2)

Look at the life of Thomas Edison. At 21, he patented his first major invention: the Electrical Vote Recorder (a device 100 years ahead of its time!). At 26, he invented the automatic telegraph and paraffin paper. At 30, the phonograph (earliest record player). At 32, the light bulb. At 32, electric generators and motors. At 38, a wireless communications system for ships at sea. At 44, the motion picture camera. At 50, the x-ray tube. At 55, the alkaline battery. At 58, a dictation machine. At 65, the talking motion picture. At 67, the telescribe. At70, sonar, radar stealth technology, and the list goes on… His life was full of successes? Yes. For the light bulb alone he “successfully discovered over 6,000 ways that didn’t work!” (his words). Edison was a success because he constantly asked questions and he never stopped trying. He was curious. He was courageous.

Look at the life of Abraham Lincoln. At 23, he lost his job, lost his first election, and was elected captain of an Illinois militia group. At 24, he failed at his first business endeavor. At 25, he was elected to state legislature. At 26, his sweetheart died. At 27, he had a nervous breakdown. At 29, he lost another election. At 33, he was permitted to practice law in the District Courts. At 34, defeated for nomination for Congress. At 37, elected to Congress. At 39, election defeat: lost his renomination. At 40, rejected for land officer. At 41, his 4-year old son dies. At 45, defeated for US Senate. At 47, defeated for nomination for Vice President. At 49, defeated again for US Senate. At 51, elected as President of the United States. Lincoln never gave up. He was courageous. He was committed.

2 thoughts on “To My Children”